A research team from the University of Basra, consisting of:

Prof. Dr. Majed Abdullah Natiq, Prof. Janan Majeed Al-Maqh, and Prof. Jabar Mansour Khalaf from the Department of Physics at the College of Education for Pure Sciences at the University of Basra, in a paper entitled (Calculating the rate of spin polarization for a system of two quantum points in the form of T placed between two poles (ScC(111) surface C-terminated

In: Journal of Magnetism and Magnetic Materials

And approved in international containers (Scopus)

In the publishing house: Elsevier

The research included a device consisting of two T-shaped quantum dots placed between ferromagnetic poles (the surface ScC (111) with the C-terminus), the theoretical treatment was accomplished using a growth-time effect method. The effect of the time-dependent external field and the time-dependent coupling interaction, as well as the effect of the energy interval at the quantum point on the spin transfer process through the device, were studied. To examine the device, the spin accumulation was calculated on the quantum point, the charge current, the spin current and the spin polarization rate, where we noticed that the density of the polarity states has a clear imprint on the calculation of the energy window and that the energy window increases with an increase in the energy spacing, as well as with an increase in the frequency of the approved external field on time. From observing the results, we find that the time-dependent external field and the time-dependent coupling interaction play an important role in the fabrication of devices with full-thrust polarization and controlling the rate of spin-polarization in the device. Spin-based control has many applications in spin-based quantum devices such as quantum computing and spin filter devices. 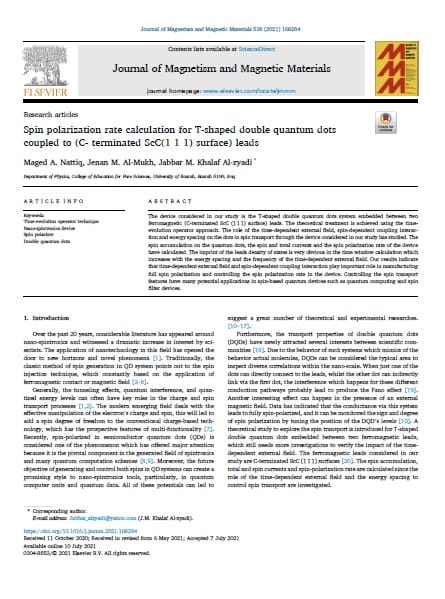